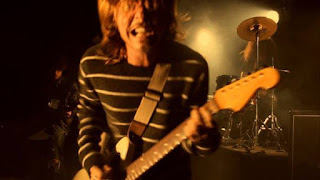 Who does not know the song "Smells Like Teen Spirit" was Nirvana. Released 10 September 1991, the song became an iconic song of the band from Aberdeen, Washington. This song was the one who became one of the factors that brought Nirvana, the band is well known among radio listeners campus and scene small underground to success in the mainstream. Many sources say the moment of success of "Smells Like Teen Spirit" is the moment when alternative rock began to enter into the realm of mainstream. There are many interesting facts and stories about how this song was made, ideas and unique events related to this song.

Kurt Cobain claimed that this song is a rip off [pirated] of several songs, including "More Than A Feeling" of Boston. In 1994, Kurt also admitted, "I'm trying to write pop songs are cool. Actually I tried to rip off [plowing] The Pixies. We recognize that our dynamic wear them; soft and quiet and then loud and hard."

Many consider this song prepared since long before the recording, when the song was created just a few weeks before the Nevermind recording sessions in 1991. The song was inspired by the writings of spray paint from Bikini Kill vocalist Kathleen Hanna, which reads "Kurt Smells Like Teen Spirit" Wall.

Cobain think the slogan was a revolutionary message, when Hanna admitted that Teen Spirit deodorant brand is only used by boyfriend Kurt later, Tobi Vail. However, Kurt admitted that he did not know about the body spray after the song was released. When Kurt first showed this song to two colleagues, Bassist Chris Novoselic said that this song sounds 'unreasonable'

But Dave Grohl helped Kurt to change this song. Kurt said, "Wait a minute. Why did not we slow down for a moment. So, I started with me playing the part verse, and Dave played his drum beat.

As a result, this is the only song on the album Nevermind in which three members of the band written into a co-writer on the loan. "Smells Like Teen Spirit" was recorded with producer Butch Vig of Garbage band, only with three times the take.

This video clip featuring the Nirvana song playing in the hall accompanied by cheerleaders result in chaos and all the band instruments were destroyed, according to Kurt's anger did not pretend. "At that time they were annoyed that have long been waiting for filming," Kurt said. "When they began to sway, they just say 'Fuck You' because they are very tired and upset with what they experience all day," I'm Kurt.

The emergence of a janitor cleaner who danced with her mop is an implicit expression of the past Kurt who once worked as a clerk at a high school in order to increase his income.

Nirvana's record company, DGC, not knowing that "Smells Like Teen Spirit" will be a great success. Previously they had prepared "Come As You Are" as a potential breakthrough hit from Nevermind. As a result, "Come As You Are" became the second single.