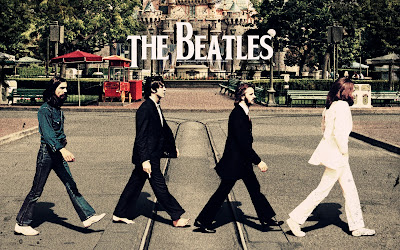 The Beatles were a rock band legendary from Liverpool, England. Consisting of four personnel, namely John Lennon, Paul McCartney, George Harrison and Ringo Star. Most of the songs of The Beatles were formed in 1959, was written by Lennon and McCartney. Since the age of 15 years, Lennon and McCartney began writing songs together or individually. One of the songs he produced in this period were 'Hello Little Girl' which became hits by The Fourmost in the 60s. In 1961, Stuart Sutcliffe The Beatles and position as bass player paul replaced. Appearance of The Beatles in Liverpool in 1961 received a standing ovation, and even a local businessman Brian Epstein interested and eventually became the manager of The Beatles.

The Beatles then made a recording contract with record company Parlophone branch in 1962. They released a single called Love Me Do to win the position of the 17 most popular songs in the UK. Furthermore Please Me, released in 1963 ranks as the second most popular song, and the momentum Beatles popularity in Europe, and then venture to the Continent of America for touring in various cities great. The Beatle has changed the image of love songs to rock homage to the theme song are diverse.

The Beatles were originally called The Quarrymen in 1957. Quarrymen was a skiffle band (band using household tools, which at that time was the trend in Liverpool) consisting of Lennon and his friends. Quarrymen his way several times to change the name, and personnel coming and going. The band was then called 'The Beatles', a name said to be found by the Lennon. The Beatles perform every night in a filthy night club, and live like a musician in a small inn nearby.

The Beatles returned to Hamburg and recorded 'My Bonnie "with Tony Sheridan. Stuart Sutcliffe chose to remain in Hamburg with his girlfriend, Astrid Kircherr, when The Beatles will return to Liverpool. So McCartney took over bass. A few months later Sutcliffe died in Hamburg due to brain disorders.

Did not stop there, The Beatles later accepted Parlophone Records, a label under the control of EMI, with producer George Martin. Terms are granted Martin is replacing their drummer, Best, considered less competent. Best was replaced by Ringo Starr. The Beatles launched the single "Love Me Do" which debuted at number 17 on the UK charts. Their second single, "Please Please Me ', became their first single to reach the top rank on the charts.

However, after the death of Epstein (the manager) in 1967, Lennon was the one who was not happy to be action McCartney, who took over leadership of the band. He hates projects led McCartney, as the film Magical Mystery Tour and Let It Be. Lennon also became the first to break the agreement beginning of The Beatles, which is to not bring their wives and girlfriends in the recording process, by bringing Yoko Ono in the process of making the album White Album in 1968. Lennon was also among the first states to come out of The Beatles.