The controversy behind the song "All About That Bass - Meghan Trainor "

Who does not know the song titled All About That Bass, songs sung by American singer Meghan Trainor. The song dates dominate almost all the songs on radio stations around the world. Meghan Trainor's career was skyrocketing at an alarming rate, even maybe she entered the list of the highest-paid singers today. 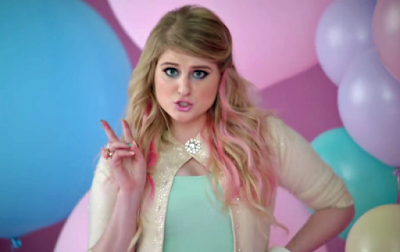 But who would have thought that Meghan Trainor until now has not received full payment or a royalty on the explosion of song All About That Bass. Megan has not received royalties on the song not because the producer is naughty, but indeed such royalties Meghan scheduled to be received in April 2015.

Controversy behind the song "All About That Bass - Meghan Trainor "

"I have not received any money at all. They told me I would receive a check in a large number of April, so I hope it's true, " said Megan.

Singer born December 22, 1993 was also denied reports circulating that he was suddenly rich as her debut song was getting tremendous popularity. "One would think that if I were rich, but it is not. I have not been able to make a large purchase anything, but I'm trying, "he said.

Following the success of All About That Bass Meghan Trainor are now much ogled other musicians to be invited to collaborate, one of whom is Harry Styles of One Direction personnel. Meghan was flattered when later became collaborated with Harry Styles.

"I would be very happy to work again and I thought I would do. It will be fascinating when they asked me to write with One Direction. I enjoy writing (songs), so I'm happy, "he concluded.