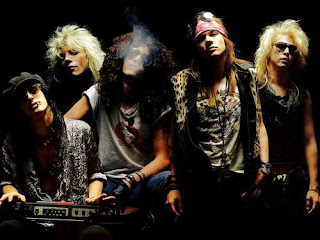 Guns N Roses became the biggest rock band in the world in 1991-1992 when the double album "Use Your Illusion" exploded on the market. With the line-up at that Axl Rose (vocals), Slash (guitar), Izzy Stradlin (guitar), Duff McKagan (bass), Dizzy Reed (Keyboard), and Matt Sorum (drums). At midnight on 17 September 1991 Guns N Roses (GNR) become the greatest band in the world. Hundreds of stores opened until morning to sell the album "Use Your Illusion" consists of two albums. For the first time in history, the two albums that were ranked first and second best-selling album in the U.S..

But the greatness and success GNR at that time does not necessarily make them more solid personnel. What happens is when Izzy Stradlin surprisingly resigned from GNR in mid-concert world tour album Use Your Illusions (Use Your Illusion World Tours). Izzy was replaced by Gilby Clarke at mid-concert world tour. It can be seen in the video clip "Do not Cry", in a clip that is tucked pictures when one fan put an inscription on the back "Where's Izzy??? ". Or other events just before a concert in Tokyo, there is also a poster that read "Who's Gilby??" Proving that GNR fans really miss Izzy figure.

GNR fate changed in 1994. they fuss with each other, often in rehab drug addiction, and the album The Spaghetti Incident? Failed in the market. Their rift begins from here.

After that they had gathered at a studio in Los Angeles to record a new album scheduled to be released in 1995. however, shortly after they were seized with a disease that is common in other bands: boredom. They are too rich so they do not need to do any thinking.

Rose himself as the leader of the project of making the album, but he certainly can not lead. Incidentally the Geffen Records also pamper GNR. Thanks to the sale of the album that brings enormous benefits, they provide exceptional flexibility to GNR to write and record. At that GNR had released singles Sympathy for the Devil which is the soundtrack of a movie (Interview With the Vampire).

Ahead of the concert tour that will be held mid-year 2008, the band Guns n Roses to panic. Without any definite cause, guitarist Robin Finck they leave. The news that stuck out, Robin rejoined the band Nine Inch Nails Tip (NIN) to hold a tour next summer. As a result of the release of Robin's, AXL was upset because when Robin came out all so messed up, the fans are confused, and they feel a bit annoyed.

As in the year 2000, Robin never out of Guns n Roses to join NIN, and take a tour of the country. After the concert tour ended in 2001, he returned again to join Guns n Roses. To then undergo a series of tour with Guns n Roses in several countries in Asia and Europe.

Guns N Roses Rock Band 4.5 5 samuelkurnianta Guns N Roses became the biggest rock band in the world in 1991-1992 when the double album "Use Your Illusion" exploded on th...