Keroncong vocal style in presentation, many twisted and tends to slow down from the original beats. Delay in knocking because it was deliberately done to beautify twisted itself. Improvisation and ornamentation can be done very freely, as long as still in the harmonization keroncong. Keroncong vocal styles can affect the duration of the various phrases, depending on how 'over-expression' or vibrato. 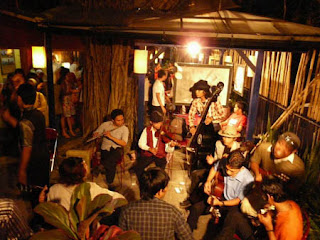 Keroncong song typical of Indonesia (keroncong, style, opera, Java style). The term keroncong brought the Portuguese to Southeast Asia around the 16th century, and there are various theories that the term of onomatopoetic element, namely the music sounds like 'crong-crong' and until now known as keroncong music.

The structure of harmony and melody keroncong visible from Western music, even the most play Portuguese folk music. Music with a melancholic impression is usually performed with two types of guitar (viola) from the Spanish and Portuguese guitara. If the viola plays the melody, the guitar plays Chord Tonika-dominant-tonikadominan continuously, subdominant rung only at certain times. The principle so prominent in keroncong, besides, vibrato vocal style characterized by a hard (considered a strong expression of emotion).

Idioms keroncong mostly divided into four phrases, each with an 8-bar (usually time signature 4/4) in accordance with the principles of style. Keroncong music figures, among others: Gesang, Kusbini, Anjarany and others.

Keroncong Vocal Style 4.5 5 samuelkurnianta Keroncong vocal style in presentation, many twisted and tends to slow down from the original beats. Delay in knocking because it was delibe...